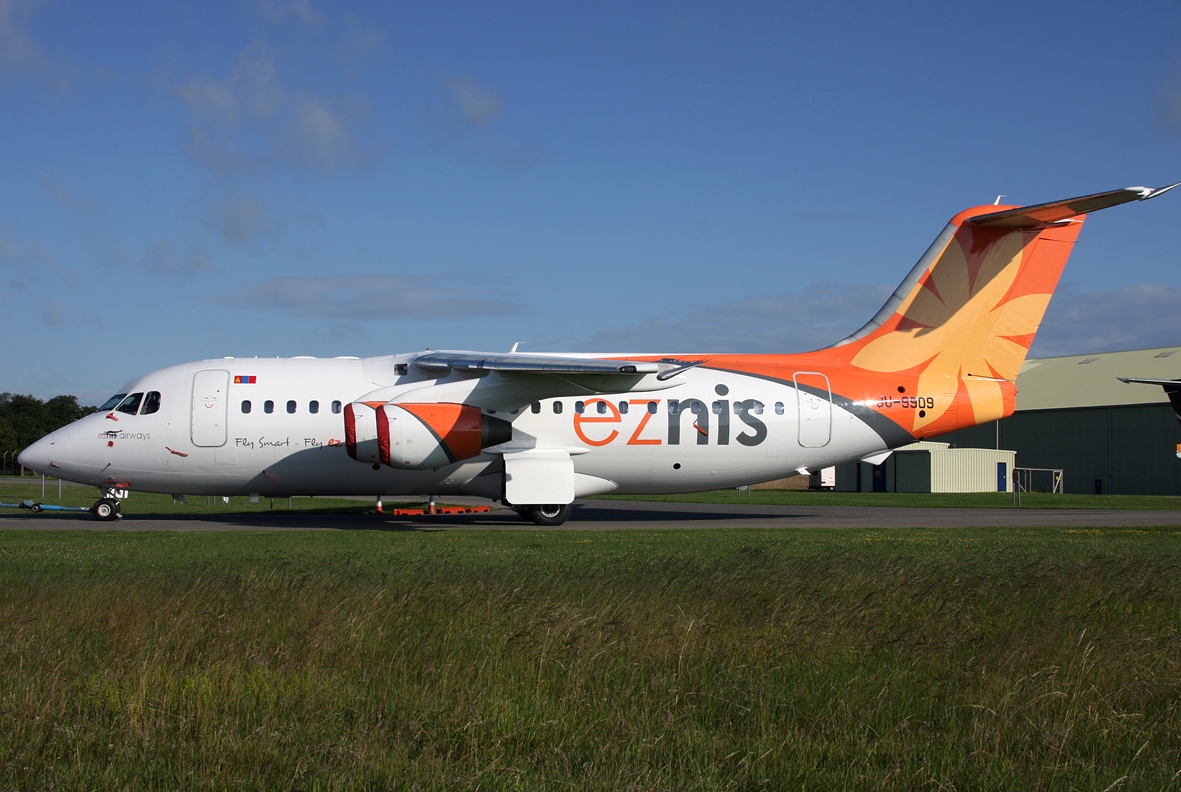 EZNIS AIRWAYS OF MONGOLIA GOES JET WITH AVRO RJ85s FROM BAE SYSTEMS Eznis Airways, Mongolia's leading domestic scheduled airline, is acquiring its first jet equipment with two Avro RJ85 regional jetliners bought from BAE Systems. The first aircraft has just been delivered and will enter service later this month; the second aircraft will follow in July. Both aircraft will seat 93 passengers in a comfortable six-abreast economy class configuration, allowing Eznis to meet the growing demand for quality air transport services in Mongolia. Both aircraft are also equipped with the BAE Systems unpaved runway protection kit that allows operations from unsealed and gravel runways. The additional capacity over the airline's existing fleet of four 34-seat Saab 340B turboprops will allow Eznis to better serve the needs of its contracted clients and individual passengers, as well as expand operations by increasing capacity on existing routes and possibly flying to new international destinations. Chief Executive Officer of Eznis Airways, S. Munkhsukh said:" Deliveries of the Avro RJ85s will be another important step towards our aim to be the number one choice for regional air service in North Central Asia, by connecting Mongolia to nearby international markets. The Avro RJ85 is a four-engined jet aircraft that provides reliable, safe and distinctive performance. Moreover, it is the only jet-engined aircraft for operation on gravel runways, which is ideal for the conditions of our country. The arrival of this aircraft will be an important event not only in the history of our airline, but for Mongolia's aviation industry." Presently Eznis Airways operates its existing fleet on the largest network of domestic destinations within Mongolia and the highest flight frequencies. Its network covers 14 domestic scheduled and charter destinations, as well as two short-haul international routes to Hailar in China's Inner Mongolia region and Ulan-Ude in the Russia Federation's Buryat Republic. The airline was established in 2006 by the Newcom Group, a leading investment company in Mongolia. It recently signed a strategic co-operation agreement with All Nippon Airways of Japan to explore bilateral cooperation in a broad range of areas such as management, operation, and future flight services between Mongolia and Japan for long term development of air transportation between the two countries.