In April 1988, when the cabin roof ripped off an Aloha Airlines 737 and swept a flight attendant to her death, it sent a startling signal to the airline industry about the dangers of metal fatigue. Airlines immediately stepped up inspections of aging jets. Federal regulators cut up old planes to look for the spots under the most stress. And Boeing redesigned the joints that hold its 737s together.

The cabin roof ripped off an Aloha Airlines 737 in 1988, having been weakened by metal fatigue. It is a recurring problem. 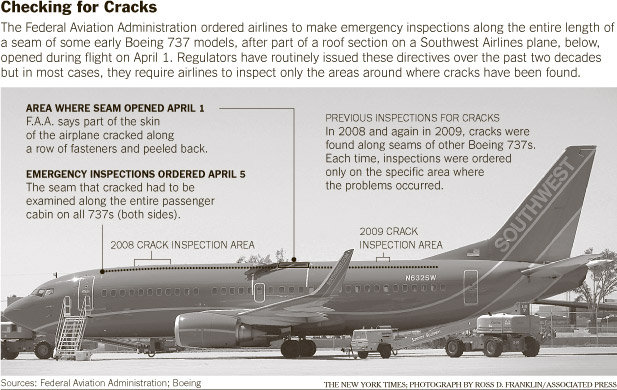 "One can inspect these old planes to death and still miss serious faults. New and aberrational failures are sure to continue turning up. Why not just send them to the scrap heap after a set number of flying hours?"
Giskander, Grosse Pointe, Mich.

They thought they had solved the problems.

But the five-foot hole in the roof of a Southwest Airlines 737 this month and other recent incidents indicated that they had not. In fact, a stream of safety directives from the Federal Aviation Administration in the years since the Aloha incident shows that structural cracks from metal fatigue remain a persistent problem on older planes.

Chillingly, the agency said in one directive that the discovery of some of the most serious damage had been "a purely random occurrence."

Safety experts say that the industry and regulators rely far too much on a patchwork of rules that are largely reactive: each time a problem in one part of the plane is found, inspectors add that area to their checklists. Late last year, the F.A.A. itself acknowledged the seriousness of the issue when, for the first time, it issued a rule to set flying limits for aging aircraft. "The potential for catastrophic structural failure," it said, "is very significant."

Even so, the F.A.A. took more than four years to write the rule, as airlines objected that it would reduce the value of their planes and force them to ground some they thought could still fly. In response, the F.A.A. toned down the rule, extending a deadline for plane makers to come up with the lifetime limits.

John J. Goglia, a former member of the National Transportation Safety Board, which investigates accidents, says the F.A.A. needs to do more than wait for the industry to set plane-retirement deadlines and rely on the airlines to do piecemeal inspections. The Southwest incident showed, he said, that the agency should order thorough inspections of a couple of the older and most heavily used 737s, using the latest technologies, to determine where cracks might develop.

Right now, he said, "it looks like you're putting Band-Aids on the airplane."

Referring to both the Southwest incident and an earlier one in 2009, in which an 18-inch hole appeared in another Southwest 737, he said, "Here's a case where we have a small hole, a big hole and if we're not going to do something serious about the entire airplane, we're going to end up with a smoking hole."

F.A.A. and industry officials say they are reviewing their policies on aging planes. But they note that fatigue problems have not caused any deaths on jetliners since the Aloha accident, even with millions of flights a year in the United States.

J. Randolph Babbitt, the head of the F.A.A., and Boeing officials said last week that it was too early to conclude that the latest Southwest incident stemmed from metal fatigue. He said investigators were also examining Boeing's manufacturing processes and other possible causes.

But whatever the outcome of the investigation, the older 737s have provided an early warning about the kinds of fatigue damage that other planes could eventually face. They have been sold since 1968, although the Southwest planes that have had problems are part of the series that was redesigned after Aloha, built from 1993 to 2000.

The 737 has been an industry workhorse because it is economical for both short and long trips. These planes tend to accumulate the highest number of flights. And given the weak financial state of the industry, some airlines have held on to them longer.

But engineers have long known that metal fatigue can develop as a plane's cabin is pressurized then depressurized over tens of thousands of takeoffs and landings. Crucial parts of the fuselage can develop cracks, much like a paper clip that snaps after being bent back and forth. It is when many small cracks link up that they pose a danger.

The Aloha plane had flown nearly 90,000 flights. Boeing had pleaded with the carrier to ground its most-used planes and fix corrosion problems. Federal investigators faulted Aloha's poor maintenance practices for the accident.