On 22 May 2010, a Boeing 737-800 being operated by Air India Express on a scheduled passenger flight from Dubai to Mangalore made an unstable approach to runway 24 at destination in day VMC and continued to a deep landing before overrunning the end of the runway at speed and falling into a ravine where the aircraft was destroyed by the impact and subsequent fire and 158 of the 166 occupants were killed and of the remaining eight, seven were seriously injured and one suffered only minor injuries.

A special Court of Inquiry was established by the Indian Ministry of Civil Aviation to oversee the conduct of the Investigation of the accident and prepare a Report on it. FDR and CVR data were successfully recovered for use in the Investigation.

It was noted that both the Captain and First Officer had substantial experience in the aircraft type as Air India Express pilots. The Captain, an expatriate contract pilot, was automatically designated as PF for the landing in accordance with the 'special qualification' requirement of the Operator because Mangalore was one of three 'tabletop' airports in India from where scheduled flights operate and was therefore on the Operator's 'Critical Airfield' List. 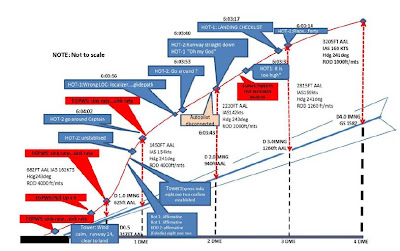 Descent from cruise level FL370 was commenced at 77nm from Mangalore and speed brakes were deployed for most of the descent. Radar at Mangalore had been previously subject to NOTAM action as unavailable and the aircraft was cleared for a procedural ILS DME Arc approach to Runway 24. It joined the northern part of the 10nm radius arc from the west at a speed of 250 KIAS and tracked it as prescribed to join the ILS LLZ at 7.5 DME. However, at this point, although the speed was recorded as 179 KIAS, the aircraft was still high and the actual altitude was 5260 feet whereas the procedure arc-to- LLZ intercept was charted to be carried out at an altitude of 2200 feet.

The reported visibility at the airfield was 6 km with no significant cloud. Descent on track but above the ILS GS began with the AP engaged. Speed and rate of descent were not excessive but the aircraft continued to descend on a profile which sustained a height more than twice that of the ILS GS throughout.

A late recognition of this excess height appears to have occurred at about 2nm range and, after the AP had been disconnected, a significant increase in the rate of descent to 4000 fpm followed. The CVR contains a remark from the Captain at this point that suggests that the aircraft may have been so far above the ILS GS that a false GS lobe had been captured without crew awareness. It was the large increase in the rate of descent which then led to the triggering of a number of EGPWS Mode 2 'Sink Rate' calls followed eventually by a 'PULL UP' Warning. It also prompted a number of calls from the First Officer of both 'unstabilised' and 'go around', all ignored by the Captain.

The aircraft had not reported established in the ILS as requested and after asking and receiving this confirmation, a late landing clearance was issued with the wind advised as calm. FDR data showed that the aircraft had crossed the runway threshold at a height of about 200ft compared to the standard landing performance assumption of 50 feet and at a speed in excess of 160 KIAS compared to the Vref for the prevailing aircraft weight of 144 KIAS.

Due to this excessive speed prior to touchdown, the Flap Load Relief had moved the flaps from 40&deg; to 30&deg; and when the speed reduced below 158 knots, the flaps moved to the selected position of 40&deg; during the flare which caused a prolonged float and a late touchdown. Although the right main gear touched the runway at about 1370 metres past the threshold, the aircraft bounced slightly and finally touched down at about 1585 metres along the 2450 metre long runway.

Soon after this touchdown with autobrake '2' selected, the Captain had selected the thrust reversers and three seconds later had commenced manual braking. However, within 6 seconds of starting manual braking, and from a groundspeed of around 80 knots , the thrust was increased and an attempted 'Go Around' was initiated. The aircraft then overran the runway, the 60 metre runway strip and the 90 metres RESA and soon afterwards, the right wing hit the LLZ antenna located 235 metres beyond the end of the runway paved surface. The aircraft minus most of one wing then broke through the airfield boundary fence before falling into the ravine.

The final part of the approach profile is shown with appended extracts from the CVR tape on the diagram below taken from the Official Report.

The Investigation noted the failure of the crew to follow the Operators SOP for stabilised approaches and for response to EGPWS activations. The steep authority gradient which appeared to have prevailed in the flight deck and a concern prevalent amongst some pilots that a go around was seen by operations management as something to be avoided. The attempt at a go around after deployment of the thrust reversers was noted as a further violation SOP and also in contravention with Boeing procedures for the aircraft type.

It was also noted that the CVR had provided convincing evidence that the Captain had been in a fairly deep sleep for a significant part of the flight with no conversation recorded between the two pilots for the first 1 hour and 40 minutes of the 2 hour 5 minute tape and intermittent sounds of snoring and deep breathing whilst the First Officer made all R/T calls and communicated with the cabin crew on the interphone.

It was noted that, despite the late touchdown, if maximum manual braking had been initiated with thrust reverser deployment, the aircraft could have been stopped within the overrun area if not the paved surface.
The Court of Inquiry determined that the Direct Cause of the accident was as follows:

– The Captain's failure to discontinue the 'unstabilised approach' and his persistence in continuing with the landing, despite three calls from the First Officer to 'go around' and a number of warnings from EGPWS.

It also determined that the Contributory Factors were:

– In spite of availability of adequate rest period prior to the flight, the Captain was in prolonged sleep during flight, which could have led to sleep inertia. As a result of (a) relatively short period of time between his awakening and the approach, it possibly led to impaired judgment. This aspect might have got accentuated while flying in the Window of Circadian Low (WOCL).

– In the absence of Mangalore Area Control Radar (MSSR), due to un-serviceability, the aircraft was given descent at a shorter distance on DME as compared to the normal. However, the flight crew did not plan the descent profile properly, resulting in remaining high on approach.

– Probably in view of ambiguity in various instructions empowering the 'co-pilot' to initiate a 'go around', the First Officer gave repeated calls to this effect, but did not take over the controls to actually discontinue the ill-fated approach.

As a result of the Investigation, the Court of Inquiry made the following 43 Safety Recommendations:

Safety Recommendations and Further Reading sections were not included but are available in the SKYbrary article.
The Report of the Court of Inquiry: Report on Accident to Air India Express Boeing 737-800 Aircraft VT-AXV on 22nd May 2010 at Mangalore was completed on 31 October 2010 and subsequently made public at a later date. 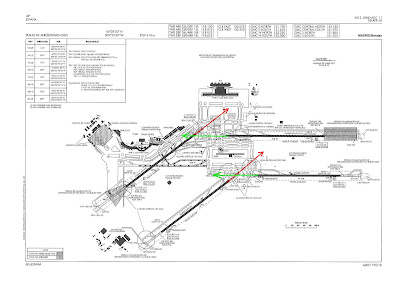