REJECTED TAKE OFF: THE OPERATION THE JK5022 FLIGHT COULD NOT PERFORM

(LAS MENTIRAS DE BARAJAS Blog).- Far off in our collective memory remains the image of the Sunbreeze attempting to take off from runway 36L on august 20th, 2008, at Madrid-Barajas International Airport, a 7.000 billion euro investment meant to be the emblem of the new and vigorous Spain.

Unfortunately for 154 people, crew and passengers, and their families, 2008 was not only the year of the beginning of the hugest crisis the Spanish society has ever faced, but also the year that showed that playing dice with air safety has disastrous consequences. This accident was the direct result of a wrong airport design and unsafe operation, born from the insanity and criminal minds of the AENA and the Civil Aviation Department engineers.

Would have been able the Sunbreeze flight crew to reject the take off after reaching V1 speed and being aware that the aircraft would not fly?

If so the response is clear: the aircraft was doomed from the very moment 36L Runway Protection Zone does not exist; instead the aircraft found a cliff and the Arroyo de la Vega river bed. 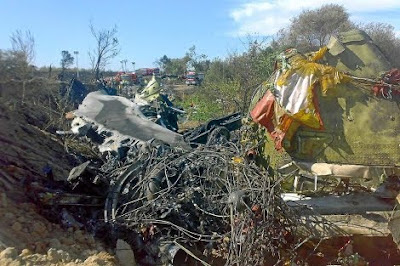 The following SKYbrary article deserves a throughout reading for those who still believe the JK5022 accident was but the consequence of misfortune or a procedure flaw. Accident and Incident Reports section shows that it would have been possible for the Sunbreeze flight crew to successfully reject the take off at any other airport but Madrid-Barajas.

The situation in which it is decided to abort the take off of an aircraft.

In the event of an engine malfunction, the recognition of a significant abnormality, or an ATC instruction to stop the aircraft during the take off roll, transport aircraft in Performance Category 'A' should be able to safely reject the take off if the decision to do so is made at a speed not greater than the calculated decision speed (V1).

A successful reject/abort will be achieved if the response is prompt and is done from memory in accordance with prescribed procedures (SOPs). After V1, a reject should only be considered if there is a strong reason to believe that the aircraft will not fly.

Continuing the Take Off after V1

Once V1 has been exceeded, the takeoff must be continued. If the performance calculations were done correctly, it will be possible to get safely airborne and climb away in the case of a single engine malfunction or failure provided that the associated crew actions are correct and comply with specified procedures. Once the immediate actions to secure the emergency have been taken, the crew will have time to decide if an immediate landing, a diversion or continuation of the flight is the most appropriate course of action.

Many modern, more sophisticated aircraft actually inhibit non critical warnings during the high speed portion of the takeoff roll and the initial climb. SOPs are often written to include a speed callout in the 80 to 100 knot regime. This callout serves as an instrument crosscheck point, a pilot incapacitation check and as the transition between the low and high speed segments of the takeoff roll.

Tyre Failure on the Take Off Roll

Tyre failure during the takeoff roll deserves additional consideration and is often the cause of an inappropriate reject decision. Failure of a tyre will result in a longer than calculated stopping distance due to the loss of braking force on the associated wheel. Airbus recommends that, for a single tyre failure with no evidence of collateral damage, the takeoff be continued if the speed is greater than V1 minus 20 knots.

The main reasons why runway excursions occur during rejected take offs can be categorised as:

– the decision to reject the take off is made after V1 and there is insufficient runway length left to come to a stop on it.

– the flight crew actions required to achieve a rejected take off are not carried out in a sufficiently prompt and/or comprehensive manner.

– stopping devices are not used to their full capacity.

– directional control is not maintained during the take off roll.

– it is found at Vr that it is impossible to achieve rotation.

Runway Excursions arising from Rejected take offs can therefore usually be avoided if Operating Procedures for the loading and take off of aircraft are robust and rigorously applied.

The V1 callout must be made in such a fashion that the verbalization is complete as the speed is achieved. Stopping action must be initiated promptly (within 2 seconds) of the reject decision. Stopping devices must be used to their full capability until such time that it is certain that the aircraft will stop before the end of the runway. Unless there is a clear indication that the aircraft will not fly, a reject must not be initiated after V1.

However, for large aircraft, there is usually a significant gap between V1 and Vr so that if, at Vr, it is found impossible to physically achieve rotation, there may be no alternative but to reject the take off. It is this scenario, on limiting runway lengths, which accounts for many of the most serious runway excursions arising from rejected take offs. Often, the problem with rotation is attributed to aircraft total weight or Centre of Gravity being different to that understood by the flight crew, due to differences in the distribution or weight of the actual load and that indicated on the certified load and trim sheet. A similar circumstance may result from take off using incorrect aircraft performance calculations or ASI speed bug settings, although a viable flight crew emergency response to these cases may be available by means of a prompt increase to maximum available thrust/power.

Aircraft Loading procedures must be properly specified, and there must be checks that the aircraft has been loaded in accordance with the documentation supplied to the flight crew. Particular care in is required where the provision of this service is by a contractor and especially so where such a contractor supplies equivalent services to other operators using the same staff, since the contractual requirements of all operators may not be the same. Where flight crews use electronic flight bags (EFBs) to calculate take off performance, special attention should be given to the applied SOP and to crew training to ensure that both crew fully understand EFB use.

All the relevant Flight Crew SOPs must be clearly specified and applied, particularly:

– Both flight crew must be fully satisfied that the prevailing runway surface conditions correspond to the assumptions which have been made in their take off performance calculations.

– There must be unambiguous requirements governing crew calls of abnormal conditions during the take off roll and the degree to which the aircraft commander then has the discretion to reject or continue the take off.

– There must be accurate calls of standard speeds during the take off by PNF and a check that both principal ASIs are indicating the same figure at the designated check speed (usually 80 KIAS or 100 KIAS).

Once robust flight crew SOPs are in place, the most effective way for an Operator to ensure that flight crew are likely to respond to a rejected take off decision and its execution in the expected way is practice. This means ensuring that the specifications for both initial and recurrent, aircraft type simulator training and assessment include sufficient time for the inclusion of un-expected events, which will invite both stop-go take off decisions and actual rejected take offs. Unexpected events should include RTO events other than engine failure; indeed, evidence from accident and incident reports indicates that inappropriate RTOs both above and below V1 are often because of a single tyre failure or a transient aberration in the operation of a single engine.

Due to the pressure on recurrent simulator time, it may be difficult to include this practice to the extent that it is desirable to give reasonable assurance of optimum response to a real case, which at the more challenging higher speeds is a rare experience. Unexpected noises which may be audible to crew during a take off, especially engine malfunctions and tyre blow outs, should be fully covered in training, since past experience has shown that these events are often the precursors of at least transient indecision and sometimes the unnecessary hazards associated with a high speed rejected take off.

– A345, Melbourne Australia, 2009 (RE HF) (On 20 March 2009 an Airbus A340-500, operated by Emirates, commenced a take-off roll for a normal reduced-thrust take-off on runway 16 at Melbourne Airport. The attempt to get the aircraft airborne resulted in a tail strike and an overrun because insufficient thrust had been set based upon an incorrect flight crew data entry.)

– B703, Sydney Australia, 1969 (BS RE) (On 1 December 1969, a Boeing 707-320 being operated by Pan Am and making a daylight take off from Sydney, Australia ran into a flock of gulls just after V1 and prior to rotation and after a compressor stall and observed partial loss of thrust on engine 2 (only), the aircraft commander elected to reject the take off. Despite rapid action to initiate maximum braking and the achievement of full reverse thrust on all engines including No 2, this resulted in an overrun of the end of the runway by 170m and substantial aircraft damage. A full emergency evacuation was carried out with no injuries to any of the occupants. There was no fire.)

– B732, Pekanbaru Indonesia, 2002 (RE HF AW) (On 14 January 2002, a Boeing 737-200, operated by Lion Air, attempted to complete a daylight take off from Pekanbaru, Indonesia without flaps set after a failure to complete the before take off checks. The rejected take off was not initiated promptly and the aircraft overran the runway. The take off configuration warning failed to sound because the associated circuit breaker was so worn that it had previously auto-tripped and this had not been noticed.)

– B737, Southend UK, 2010 (RE HF) (On 21 Nov 2010, a Boeing 737-700 being operated by Arik Air on a non revenue positioning flight from Southend to Lagos with only the two pilots on board carried out a successful take off in daylight and normal ground visibility from runway 06 but became airborne only just before the end of the runway.)

– B738, Manchester UK, 2003 (GND RE HF) (On 16 July 2003, a Boeing 737-800, being operated by Excel Airlines on a passenger flight from Manchester to Kos began take off on Runway 06L without the flight crew being aware of work in progress at far end of the runway. The take off calculations, based on the full runway length resulted in the aircraft passing within 56 ft of a 14 ft high vehicle just after take off.)

Related articles and further readings were not included but are available in the skybrary article.