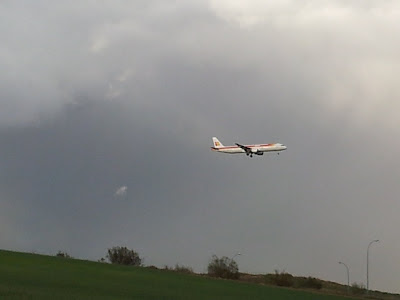 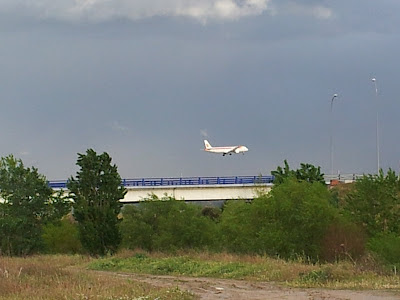 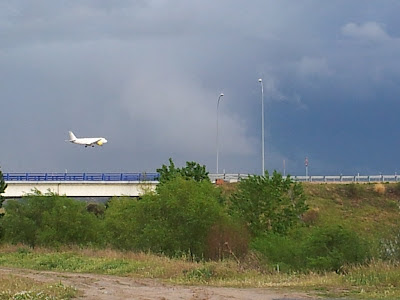 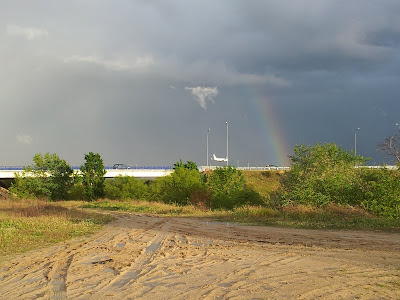 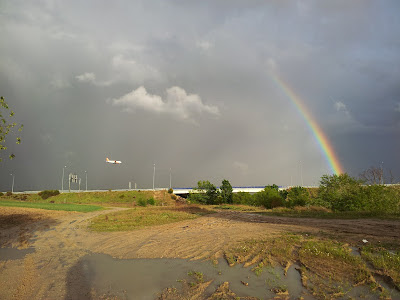 Aquaplaning, also known as hydroplaning, is a condition in which standing water causes the moving wheel of an aircraft to lose contact with the surface on which it is load bearing with the result that braking action on the wheel is not effective in reducing the ground speed of the aircraft.

The continued incidence of aquaplaning reduces the braking co-efficient to that of an icy or "slippery" runway – less than 20% of that on a equivalent dry runway.

A layer of water builds up beneath the tyre in increasing resistance to displacement by the pressure of the wheel. Eventually, this results in the formation of a wedge between the runway and the tyre. This resistance to water displacement has a vertical component which progressively lifts the tyre and reduces the area in contact with the runway until the aircraft is completely water-borne. In this condition, the tyre is no longer capable of providing directional control or effective braking because the drag forces are so low. If such a runway surface state prevails, then flight crew are required to make their aircraft runway performance calculations using "slippery runway" data; this specifically allows for poor deceleration. They must also take account of crosswind component limits in the AFM which make allowance for less assured directional control.

Aquaplaning can occur when a wheel is running in the presence of water; it may also occur in certain circumstances when running in a combination of water and wet snow. Aquaplaning on runway surfaces with normal friction characteristics is unlikely to begin in water depths of 3mm or less. For this reason, a depth of 3mm has been adopted in Europe as the means to determine whether a runway surface is contaminated with water to the extent that aircraft performance assumptions are liable to be significantly affected. Once aquaplaning has commenced, it can be sustained over surfaces and in water depths which would not have led to its initiation.

This formula is based upon the validation of hydrodynamic lift theory by experimental evidence. The effect of the relationship demonstrated is that most jet aircraft, even relatively small ones, have a significant 'window' for the initiation of dynamic aquaplaning during a landing near to the maximum approved weight and an even larger one in the case of a high speed rejected take off. It assumes that tyre pressure and tread depth are both within allowable AMM limitations.

The friction status of a dry runway surface must be assessed periodically under the terms of ICAO TPN 13. It should also be re-assessed after any maintenance which might have affected the surface smoothness. Dry runway friction is directly related to the lesser friction when a runway is wet and this affects the braking coefficient. The ICAO guidelines are not prescriptive in detail and so a range of interpretations is possible. In particular, averaging of measured friction along a whole runway or even significant lengths of it can conceal considerable variation since averaging is not always associated with extremes or with general statistical measures of variation about such an average.

Flight crew are aware that the touchdown zone (TDZ) on many runways can be affected to some degree by rubber deposits from landing aircraft. These deposits should be regularly removed to achieve a stated minimum dry friction level, but sometimes this may not happen and the actual surface friction in the TDZ can then be noticeably worse than along the rest of the runway. If a finding of low friction is made for the TDZ or any other part of a runway during regular inspections or a planned maintenance work then, unless rectification can be immediately achieved, NOTAM action to the effect that the runway is liable to be slippery when wet should be taken. Any such low friction condition is conducive to viscous aquaplaning beginning below the 'aquaplaning speed' and therefore 'slippery runway' landing performance data should be used.

The surface state of a wet runway can be assessed by either:

In some parts of the world, a standard terminology which describes a runway as dry, damp, wet, wet with water patches or flooded is in use; this is often found in association with the use of 3mm water depth over a significant part of the runway as the division between a normal runway and a contaminated one for aircraft performance purposes. It is the responsibility of the Airport Operator to communicate this information, or a local equivalent, to pilts; ATC are merely the means of communication. If ATC suspect that it is inaccurate or no longer valid, they may choose to give their own assessment made from the visual control room (VCR), but this should be prefaced by the qualification 'unofficial'

It is unlikely that the actual depth of water on a runway will be passed to an aircraft by ATC; at present, equipment which takes tactical friction measurement on wet runways (as opposed to surfaces with frozen deposits) is rarely authorised for use, so the best information a pilot is likely to get prior to landing is an informal braking action comment made to ATC by a previously landed aircraft. This should be passed by ATC with the time of the report, the aircraft type which made it and any significant change in precipitation since it was received. Prior to takeoff, direct observation should enabled the pilot to form a first hand impression of the surface state and the extent to which water is present on it. This will be particularly important in the event of a rejected take off.

The speed with which water drains from a runway surface is affected by the geometry of the surface and by whether or not it is grooved, or has a porous surface layer. Airport and runway licensing requirements limit the extremes of surface geometry, and exceptions allowed by an NAA should be published in the State AIP from where they should be replicated as Notes in the commercially published Flight Guides used by most pilots on the flight deck. Even normal surface geometry may lead to unusual water depth variation if a significant crosswind component exists; the effect of this could be periods of asymmetric braking if one main gear assembly (likely to be the downwind one) is braking normally whilst the other is aquaplaning. Where an abnormal pavement geometry is promulgated, the potential effect of the exceptions on any intended landing or take off should be assessed at the time.

It is widely recognised that the present arrangements for communicating likely runway braking action or actual surface friction measurements on wet runways are unsatisfactory and much attention continues to be given to developing an improved system.

Related articles and further readings were not included but are available in the skybrary article. 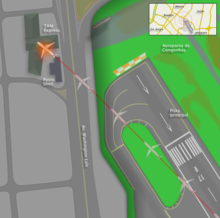