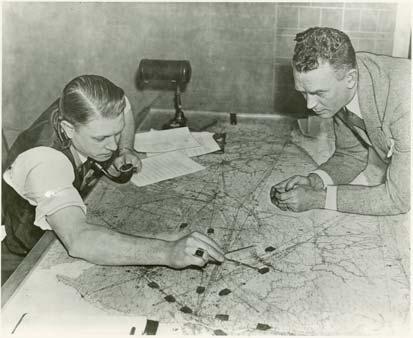 (WASHINGTON) – The U.S. Department of Transportation's Federal Aviation Administration today marked the 75th anniversary of federal air traffic control as American aviation experiences its safest period ever. Since its inception with 15 workers operating in just three control centers in 1936, the agency has become a world leader, pioneering safety improvements and developing new technology to speed up flights, save fuel and improve safety.

"The United States has the safest air transportation system in the world. But as the last 75 years show, we will never stop working to make our system even safer," said Transportation Secretary Ray LaHood.

"As a pilot, I am in awe of the aviation safety and technological advancements that have been made in the last 75 years," said FAA Administrator Randy Babbitt. "NextGen represents the next milestone in aviation innovation. The FAA is committed to transforming our national airspace system so passengers can reach their destinations even more safely and more efficiently than they do today."

Federal air traffic control began on July 6, 1936, when the Bureau of Air Commerce took over the operation of the first airway traffic control centers at Newark, N.J., Chicago and Cleveland. Faced with a growing demand for air travel, the 15 employees who made up the original group of controllers took radio position reports from pilots to plot the progress of each flight, providing no separation services. At the time, the fastest plane in the commercial fleet was the Douglas DC-3, which could fly coast-to-coast in about 17 hours while carrying 21 passengers.

Since then, the air traffic system has expanded from three control centers to include 131 federal stand-alone airport traffic control towers, 132 towers for terminal area approach control, 29 stand-alone terminal radar approach controls and 21 en route traffic control centers. The number of controllers has grown from 15 to more than 15,000, a workforce that handles an average of 50,000 flights each day. The DC-3 has given way to jet aircraft that can carry hundreds of passengers and fly from New York to Los Angeles in about five hours.

The FAA continues to pioneer new technologies that will make air traffic control safer and more efficient. The Next Generation Air Transportation System, or NextGen, will transform air traffic control in the U.S. from a system of ground-based radars to one based on satellites. In parts of the country, controllers already are beginning to track aircraft via satellites with a state-of-the-art system called Automatic Dependent Surveillance – Broadcast, or ADS-B. ADS-B will be available nationwide in 2013 and will enable more direct routes, saving time and money while also lowering the industry's environmental footprint.

July 6th marks the 75th anniversary of federal control of air traffic in the United States. On this date the federal government began regulating air traffic with the creation of the Bureau of Air Commerce in 1936.

It started with bonfires. Immense torches miles in the distance guided the first pilots from grass runway to grass runway as they delivered the most important commodity of the day, the mail.

With the passage of the Air Commerce Act of 1926 the U.S. developed air traffic rules that gave basic instructions to pilots, established navigation aids as well as standards for aircraft and instrument flight rules. The Act also granted the federal government the authority to license pilots.

Throughout the 1920s and 1930s, advances in technology led to the beginning of commercial air service and aircraft began flying during night time hours. Also during those decades, tremendous advances were made in avionics, ground-based radio navigation aids, and the manufacturing of modern commercial aircraft. The invention of the radio reconnected the pilot to support systems on the ground, providing navigation and weather information.

Air traffic picked up in the 1930s and so did the need to manage planes at airports and in the sky. This paved the way for the first airway traffic control center in Newark, NJ in December 1935. Chicago and Cleveland centers opened in 1936. These en route controllers tracked the position of aircraft using blackboards, maps and boat-shaped weights. En route controllers had no way of communicating with pilots then, but were in touch with the airport controllers, airline dispatchers and airport radio operators.

The Introduction of Radar

Next Generation of Air Traffic Control

The FAA is in the process of completely transforming the nation's airspace. A comprehensive initiative called NextGen will make air travel even safer, more dependable and efficient. NextGen integrates new and existing technologies to bring benefits in all areas of air traffic.

NextGen is a historic movement forward in flight. New technologies, procedures and key data from aviation industry partners are all part of delivering NextGen. With a projection of one billion passengers boarding commercial airliners by 2021, the FAA will continue to look for ways to improve the air traffic control system and enhance safety. Read the FAA's 2011 NextGen Implementation Plan for more information.