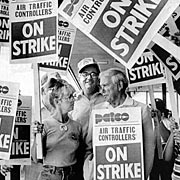 The actions of the Professional Air Traffic Controllers Organization (PATCO) have continued to have an effect on controllers well past the 1980s. The FAA has continued to abuse their power and failed to negotiate with controllers since then. As the United States federal aviation system continues to grow, something must be done to boost morale within the people that control it all. To understand why the new air traffic controllers union, NATCA, is battling yet again with the FAA one must understand how it all began.

The United States operates the most complex and efficient air traffic control system in the entire world. On August 3rd, 1981 this system was disrupted when nearly 13,000 air traffic controllers walked out of their jobs with the Federal Aviation Administration (FAA) and onto the picket line. The exact reasons for the strike varied from one controller to another, but one thing they all knew was that this was an illegal strike against the United States government (in doing so, the union violated a law {5 U.S.C. (Supp. III 1956) 118p.} that banned strikes by government unions). President Ronald Reagan gave the striking controllers a 48 hour window to return to work or they would be fired. Approximately 1,650 controllers returned to work, the other 11,350 to include a 34 year old man named Terry Paddack, did not and lost their jobs. 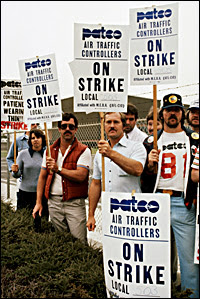 Terry had only been with the FAA for a short time when the strike occurred. Just the year prior in 1980 he had transferred from Tucson, Arizona to New York Terminal Radar Approach Control Facility (TRACON), back then called the Common IFR Room. This transfer, though he didn´t know at the time, would put him in the center of one of the biggest labor strikes in history. He was in the midst of training to become facility rated when talks of the strike first started to occur. Though Terry was fairly new to the administration he felt strongly about the strike. Shorter working hours, higher salaries, and earlier retirement were three things most controllers could agree on.

The aviation community was booming in the early 80s and everyone involved was benefiting from it except air traffic controllers. Flight attendants were making as much as controllers at an average of $34,000 a year and some 747 pilots were making $150,000 a year. Controllers felt they deserved higher wages due to the highly stressful nature of their job controlling aircraft but were told they were government employees and not really part of the aviation community. Several failed negotiations between the FAA and the Professional Air Traffic Controllers Organization (PATCO), the union which represented the majority of controllers, prompted them to overwhelmingly vote 86% in favor of a strike.

Terry was certain with the number of air traffic controllers out on strike there was no way the aviation system could operate, especially in vacation hot spots such as Las Vegas and Hawaii. Finally his voice was going to be heard. In just a matter of days the President would approve of the $770 million proposed package the controllers wanted. Thirty-two hour work weeks, a $10,000 a year wage increase, retirement after 20 years regardless of age, he could almost taste it.

That morning Terry eagerly awaited news from the FAA regarding the strike. Little did he know, President Reagan was about to reveal one of many surprises he had for the controllers. The first came shortly after the announcement of the strike. Terry and his wife were watching the news when it was announced that all controllers had 48 hours to return to work or be terminated. How could a President do this to a union that supported him during his campaign? In a letter dated October 20th, 1980 candidate Ronald Reagan addresses Robert Poli (PATCO President) stating:

"I have been briefed by members of my staff as to the deplorable state of our nation´s air traffic control system. They have told me that too few people working unreasonable hours with obsolete equipment has placed the nation´s air travelers in unwarranted danger. In an area so clearly related to public safety the Carter administration has failed to act responsibly. You can rest assured that if I am elected President, I will take whatever steps are necessary to provide our air traffic controllers with the most modern equipment available and to adjust staff levels and work days so that they are commensurate with achieving a maximum degree of public safety. I pledge to you that my administration will work very closely with you to bring about a spirit of cooperation between the President and the air traffic controllers".

On August 3, 1981, during a press conference regarding the PATCO strike, President Reagan stated: "They are in violation of the law and if they do not report for work within 48 hours they have forfeited their jobs and will be terminated." Ronald Reagan declared the PATCO strike a "peril to national safety"

"He is criticizing President Carter for not acting responsibly in addressing our concerns and he wants to fire us all?". His wife knew it was over for him if he did not return to work. He felt that President Reagan was bluffing. There was no way the government could run the system without us. I actually felt sorry for the President when he made that announcement that we were given 48 hours to come back to work or we would lose our jobs. I actually wondered how he was going to get out of that. PATCO and the controllers believed that if at least 80% went on strike and stayed on strike, they could win this battle. Shortly after President Reagan´s announcement 1,650 controllers returned to work fearful that their jobs might be at risk. They now had only 76% of the controllers out on strike.

Terry could not believe how his peers could betray him. For most PATCO controllers those people can never, never be forgiven! His wife told him to go back to work like the others but he couldn´t turn his back on his friends and plus there was no way President Reagan would fire the remaining controllers.

The 48 hour window ended and now 11,350 controllers were left without jobs. Families were suffering on lack of income. Even though President Reagan had fired all remaining controllers on strike, most of them thought a resolution could still be made.

Instead of walking the picket lines, Terry immediately began working as the communications director for the three hundred striking controllers in his area. This was called the New York Terminal cluster. Meetings were held every night and Terry was in charge of writing a newsletter everyday to keep people informed on what was going on when they came off the picket line for the day. No money was coming in for Terry and his wife was working extra hard to support the two. Terry described it as "economic capital punishment".

Months went by and no agreement had been made with the government. In fact, PATCO was fined millions of dollars, leaders were punished, and the union was de-certified, the government was even going after individual controllers threatening imprisonment. Everyday fewer people showed up to walk the picket lines. After two or three months Terry surrendered to the fact his career as an air traffic controller was over. He wrote:

"I was very, very angry and very, very bitter. Why? The truth is that we knew it was an illegal strike! we knew we were violating the law and we knew that we could be arrested. But it was still unbelievable to me that we were never given a chance to say "I made a mistake and I´m sorry". We were just eliminated, thrown aside like we didn´t matter. So I went through a lot of anger and bitterness".

Almost 25 years have passed since Terry´s career ended with the FAA. His anger with the controllers that betrayed him, the FAA, and even the world that doesn´t understand him are still there. Why is it that some controllers today hold grudges towards the PATCO controllers? The FAA is treating the controllers today the same if not worse than they did us? The only thing the FAA learned from the strike in 1981 is that no one can mess with them.

On August 3, 1981 PATCO controllers were forced to go on strike against the FAA due to the deplorable working conditions. President Reagan fired over eleven thousand of the controllers, threw hundreds in jail, and banned the controllers from their profession for life (this ban was later rescinded by President Bill Clinton in 1993). On October 1981, PATCO was decertified by the Reagan Administration, and a year later PATCO filed for bankruptcy due the governments union busting tactics. The 1981 strike and defeat of PATCO has been called "one of the most important events in late twentieth century U.S. labor history."

September 3rd, 2006, almost as it was timed that way, marked the imposed new FAA contract. The FAA seems to have done this to show controllers that they cannot be messed with. The new FAA contract was imposed without the consent of the National Air Traffic Controllers Association (the new controllers union). Under the new contract, controllers will be forced to work longer shifts, get paid 30% less, and be subject to transfer whenever the FAA deems necessary, among many other things. With the possibility of a strike out of the question due to what happened to PATCO in 1981, NATCA has their hands tied as what action they can take.

Marion Blakley, the FAA Administrator at the time of the imposed work rules, has stated that: "the agency wants to be run more like a business". With the trend of pushing towards privatization over the last two decades, that is not out of the reach of the FAA. The government should deliver services to the consumer in the most efficient way possible. Certain actions to privatize a public safety venture could result in an unexpected negative outcome; however, with the way things have been going over the past 25 years, more and more controllers are searching for private work than attempting to do business with the FAA.